The HP ProBook 445 G9 has been updated to its ninth generation as one of the few business books in the mainstream price range. Compared to the HP ProBook 445 G8, the ProBook 445 G9 seems to have little difference in terms of appearance, and it still with a silver body, so what exactly has it been updated? This article will focus on the introduction and testing of its upgraded parts.

It continues the classic design of the HP ProBook 445 G8, with a textured, high-strength aluminum body and a simple, understated silver-gray design that meets the needs of a business environment while also taking into account a certain level of durability. 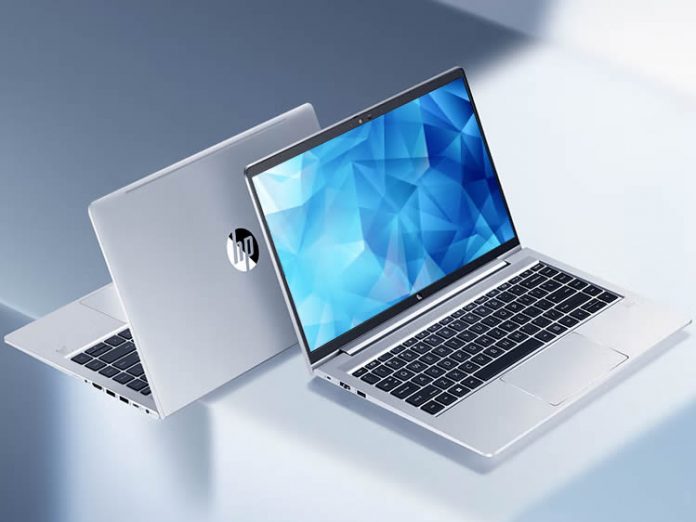 In addition, the 3D unibody process makes the seams of the ProBook 445 G9 visible only at the edges of the bottom cover, and the gaps are very narrow. This notebook comes with a 14-inch high color gamut screen that has been tested to cover 99% of the sRGB color gamut, with a maximum brightness of 472 nits and an average color accuracy of 0.72.

The biggest highlight of this screen is the brightness of up to 472 nits. For many notebook products, including thin and light notebooks and business notebooks, the maximum brightness of the screen can only reach 300. When facing outdoors or in high light and backlight environments, higher brightness makes it easier to see the screen.

The HP ProBook 445 G9 keyboard still has a familiar feel. The 1.5mm long key range brings the notebook in the first-class typing feel, and supports two levels of backlight adjustment. In addition, this keyboard has many highlights; the system’s built-in HP Programmable key function can be set to the function key F12, to achieve quick open website or entering text and other functions. The downside is that the power key is still located in the keyboard.

The touchpad feels thicker, and the pressable area is larger; basically, the lower half of the second half can be easily pressed, the fingerprint recognition module is located in the lower right corner of the palm rest.

Finally, let’s take a look at the ports. The left side of the body has an RJ45 network port and one USB 3.1 Gen 1 port, respectively; the right side has a power connector, one full-featured Type-C, two USB 3.1 Gen 1, HDMI 2.0, and 3.5mm audio jack, respectively.

It is worth noting that the ProBook 445 G9’s power supply has switched back to a round-port jack, which officials say is to not take up the only Type-C port.

Because of the epidemic, everyone has gradually adapted to online video conferencing, and users and manufacturers have also realized the shortcomings of contemporary computers in this regard. In the past two years, new products of thin and light notebooks and business notebooks have focused on “video conference”, the same is true for the ProBook 445 G9 that we are going to talk about today.

The HP ProBook 445 G9 has a physical paddle on the camera to prevent prying eyes, which is a very simple mechanism, but also the most effective way to protect the privacy of the camera; the camera supports IR infrared, which allows face recognition to enter the system and no longer requires manual password input. The above features are available on the ProBook 445 G7 and ProBook 445 G8, so let’s see what’s new in the ProBook 445 G9.

The first is the camera’s support for TNR Time-Series Noise Reduction ambient light sensing, which automatically detects and adjusts ambient light. The camera on the ProBook 445 G9 intelligently adjusts the light on the face in all types of lighting conditions.

The first is that this camera supports ambient light sensing with TNR timing noise reduction, which can automatically detect ambient light and adjust it. Business people are faced with meeting needs anytime and anywhere, and this camera can adjust the facial light in low-light environments. The camera on the ProBook 445 G9 can intelligently adjust the facial light in various lighting environments.

In addition to intelligent light adjustment, the camera is an 88-degree wide-angle camera that allows you to capture more images. This is a benefit because you don’t need to deliberately adjust the angle of your computer and sit position to put your entire face in the camera when attending a video conference.

In addition to video, the ProBook 445 G9 also offers a significant improvement in audio, with dual array microphones and Noise Cancellation Software, which optimizes noise reduction performance, even with a mask, to accurately pick up speech and filter out ambient noises such as alarms, pets, and door closers.

Overall, the ProBook 445 G9 improves the overall performance of online meetings from the visual and auditory aspects, after all, as a business elite, blurred video effects, cluttered and inaudible speech during video conferences are unacceptable and will leave a bad impression on clients and bosses, and the meeting content will not be conveyed properly. The ProBook 445 G9 focuses on improving the user experience in this area to bring users a clearer and smoother online meeting.

Surprisingly, compared to the 5600U on ProBook 445 G8, this 5625U has a great performance improvement. This is because the ProBook 445 G9 has made great progress in performance tuning. In AIDA 64 system stability test, running for 40 minutes, the CPU power consumption is stable at 25W, the core frequency is 3.02GHz, and the temperature is 76 degrees.

Thanks to the excellent power control of the 5000 series Rex processor, the 1W low-power battery, and the increased battery capacity, the ProBook 445 G9 also maintains the leading position in this class of business notebooks in terms of battery life.

In the power saving mode under Win11, the whole process is connected to Wi-Fi, and the screen brightness is 50%, using the modern office mode of PCMARK 10 for battery life test. In the end, the battery life of this notebook is 12 hours and 12 minutes, which can basically meet the office needs under normal circumstances.

The HP ProBook 445 G9 looks like it’s no different from its predecessor, but in fact, it has been upgraded in many aspects, such as an all-around improvement in video conferencing; it has also passed several certifications in durability and reliability; and it has reached 25W in performance release, which is outstanding in a business book.