The Huawei MateBook D (2018) has released silver and obsidian black two new variants in the early of this January. The laptop we will disassemble is powered by Intel’s eighth-generation Core processor coupled with NVIDIA MX150 independent graphics card. Its performance has been greatly improved. The laptop comes with 8GB DDR4 and 128GB SSD coupled with 1TB HDD. 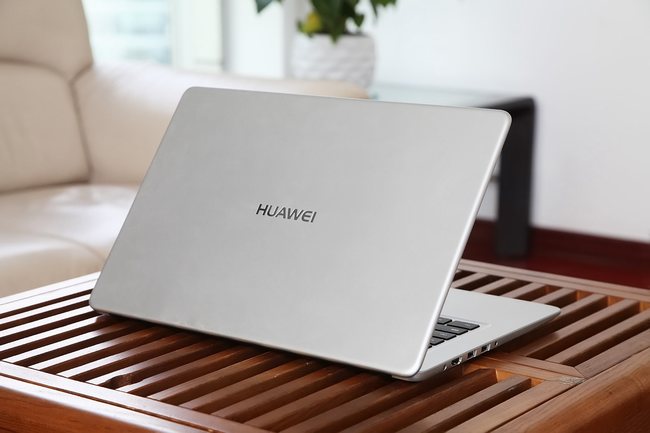 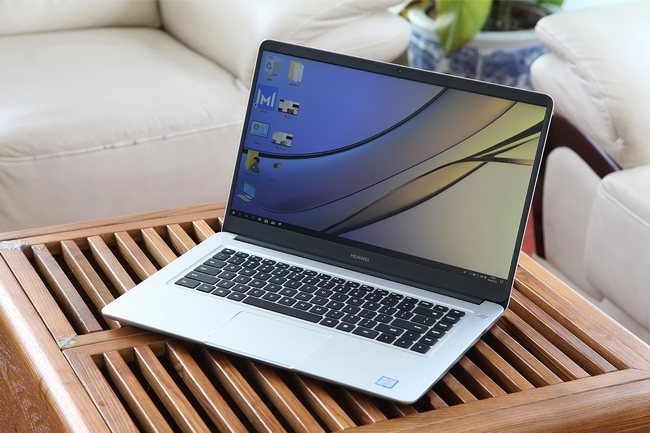 The MateBook D (2018) features a 15.6-inch 1,080p anti-glare display. As a thin and lightweight laptop, the variant’s thickness only reaches 16.8mm (the thickest part), and it weighs 1.9kg. The narrow bezel design makes the laptop look small and exquisite. 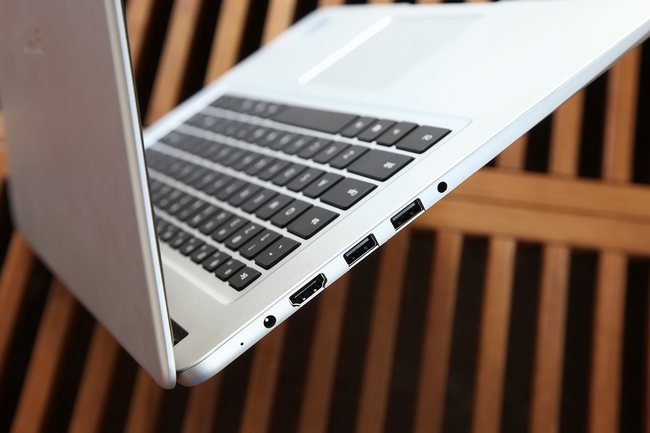 The laptop adopts all-metal design and has applied the brief design on each surface with good touch feeling. The ports on the left include two USB3.0 ports, a USB2.0 port a standard HDMI port and two-in-one audio port. The MateBook D (2018) provides small portable power adapter. 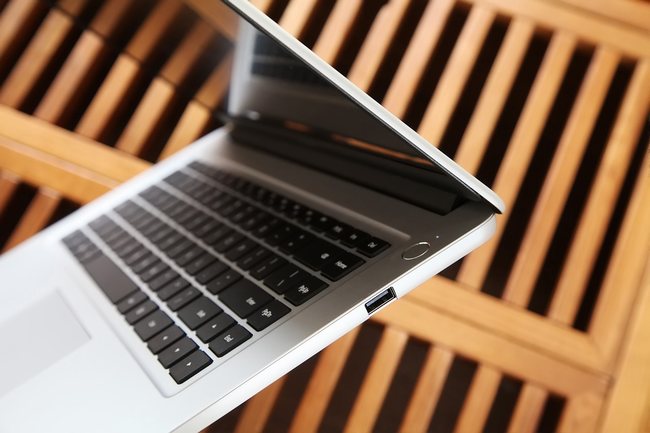 The right side of the laptop only provides a USB2.0 port. This variant doesn’t come with a fingerprint reader and an all-in-one SD slot. It doesn’t feature a backlit keyboard. 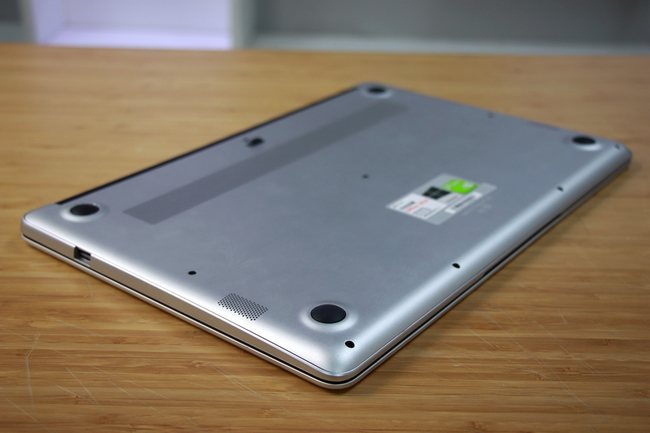 It is the laptop’s back cover. 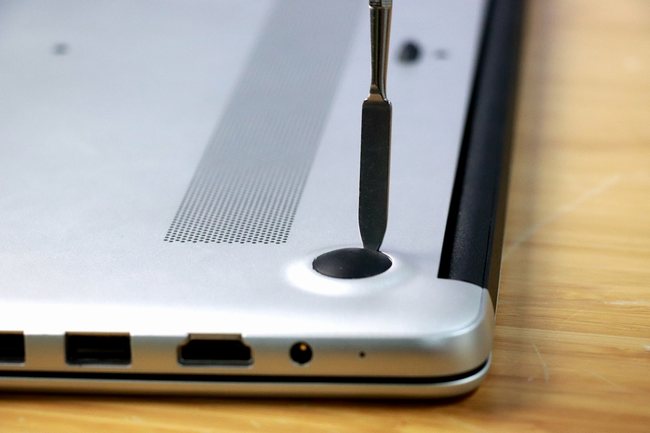 The screws on the back are of the same specification. The internal screws have the different specification. Prepare the relative tool for the disassembly. 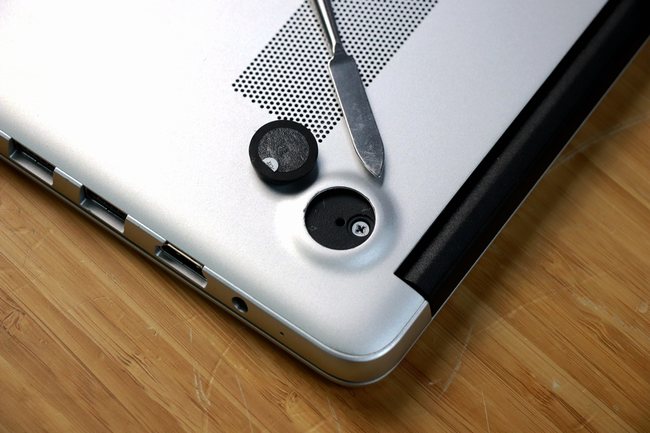 Except for visible screws, there are also four mats on the back cover. First of all, remove the hidden screws under two mats. The mats are stuck by the double-sided tape. 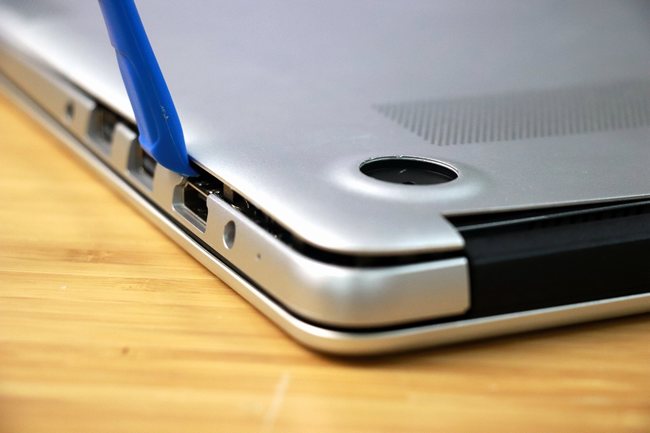 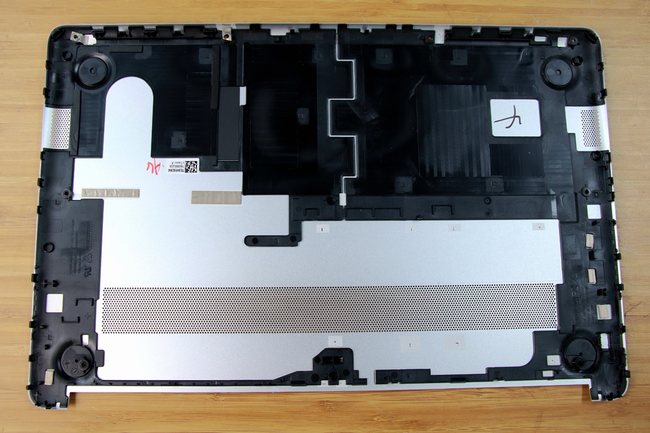 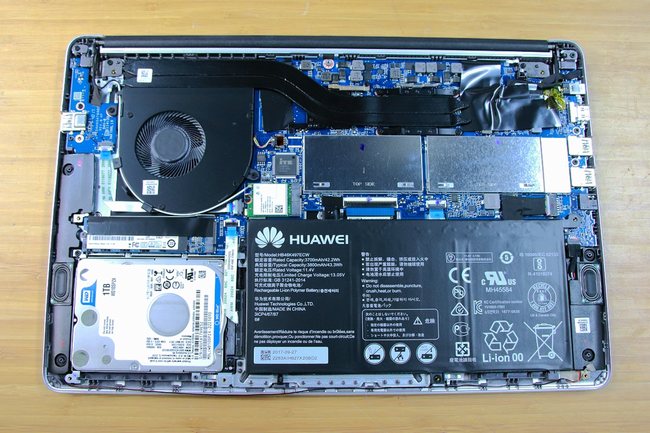 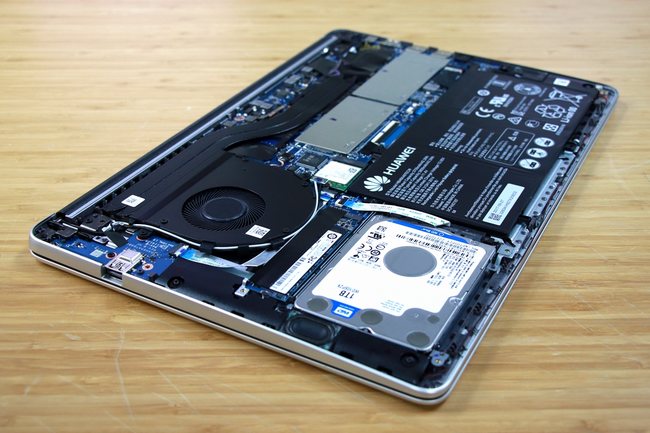 We can see that the M.2 port SSD and a 2.5-inch HDD on the left. The black chunk on the right is the battery. Two speakers are placed on the left and right. 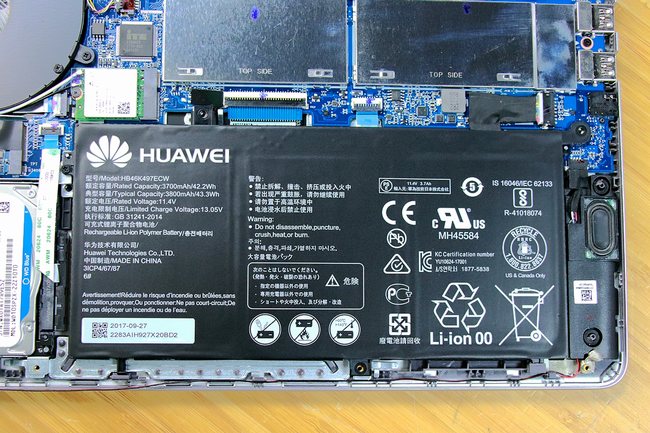 If you want to continue the disassembly of the rest accessories, you need to power off the internal structure. 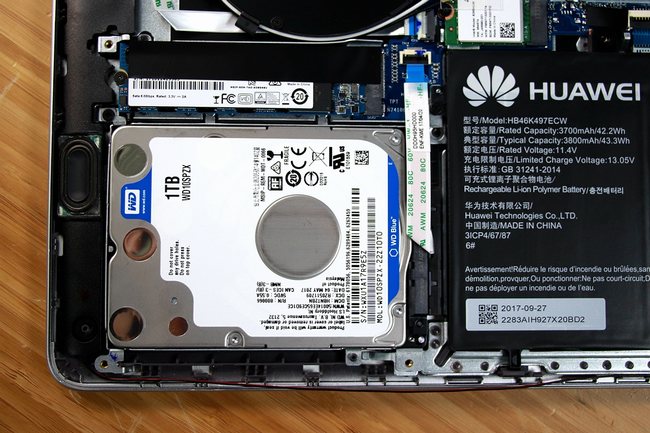 The silver Huawei MateBook D (2018) comes with a 128GB SSD coupled with a 1TB HDD, which can be changed. For most users, there is no need to upgrade. Of course, you can use two SSD. 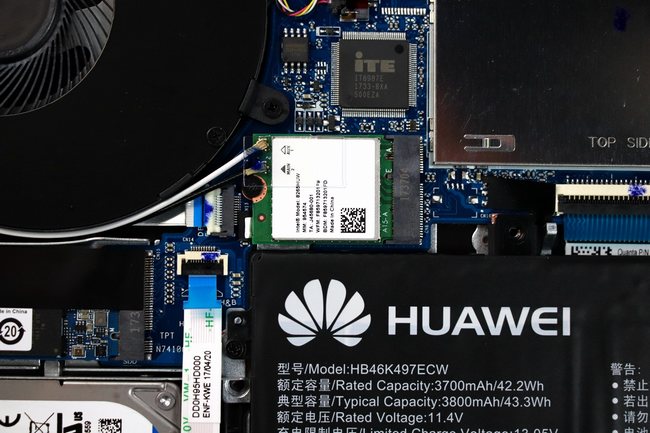 Here is Intel’s Wi-Fi module. The Wi-Fi module needs to be taken out while disassembling the motherboard. 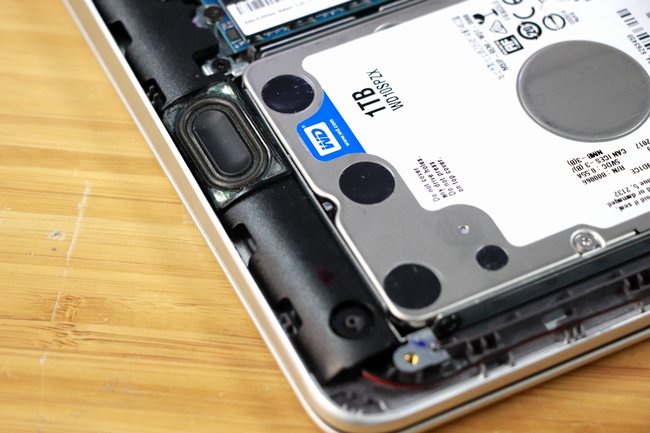 There is no need to remove two speakers on the two sides. All we need is to disconnect the cable which connects the speakers to the motherboard. 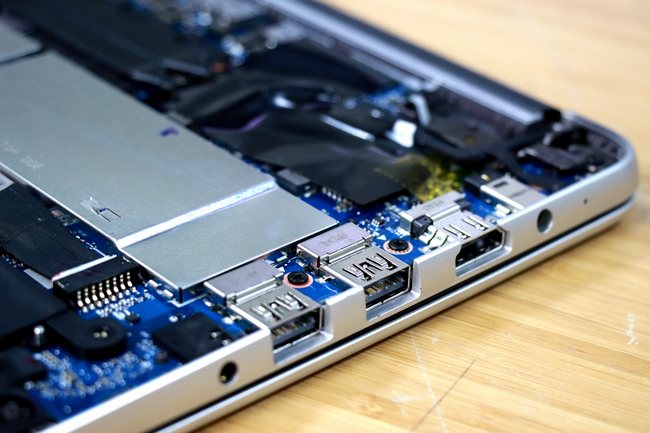 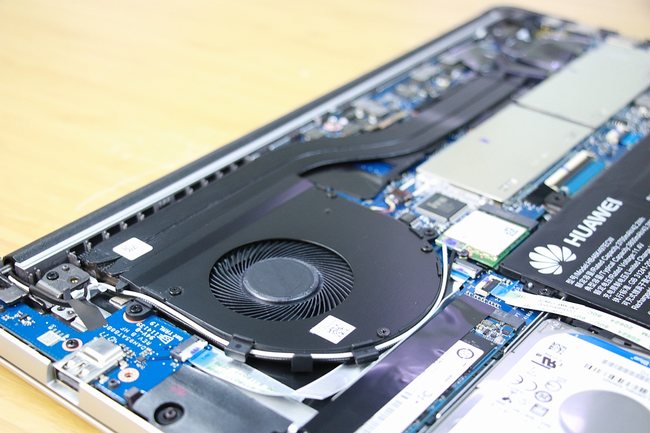 The USB port uses independent circuit board. The fan can be removed. 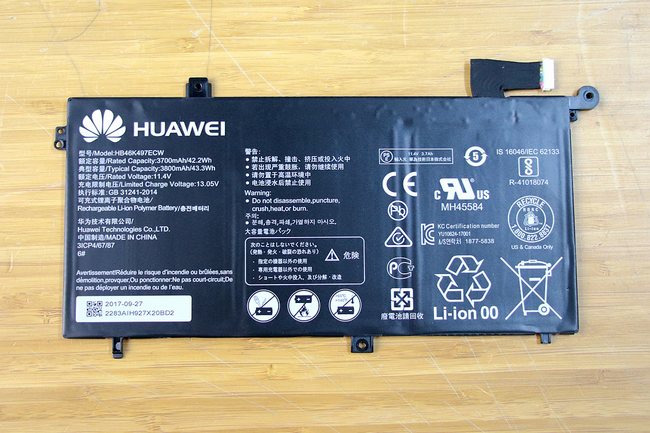 The laptop sports a three-chip 3800mAh battery which can work approximately 9 hours. The battery is fixed by screws. We can easily take out the battery. 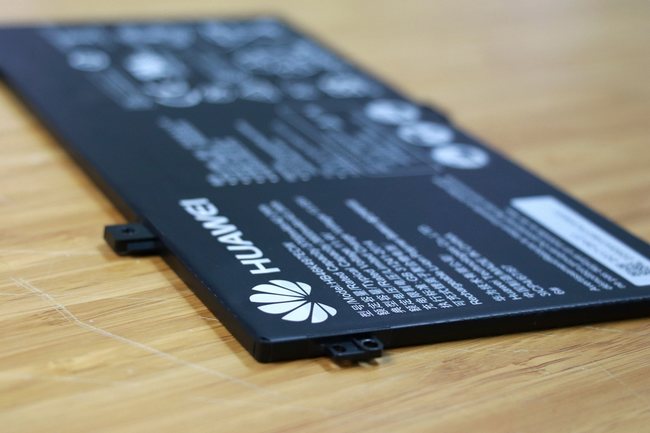 The battery is thin. 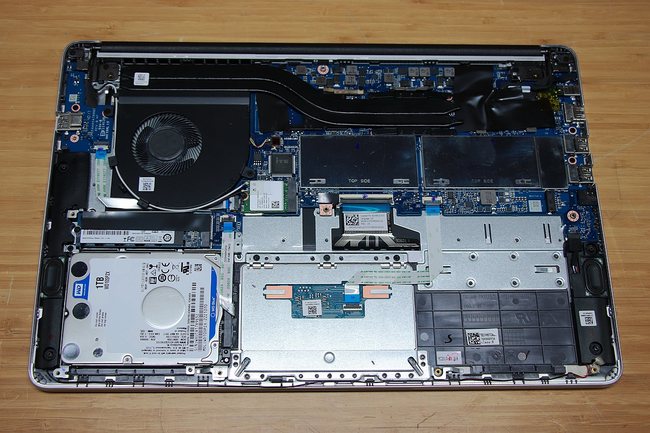 It is the internal structure without the battery. After removing the battery, we can continue to disassemble other accessories. 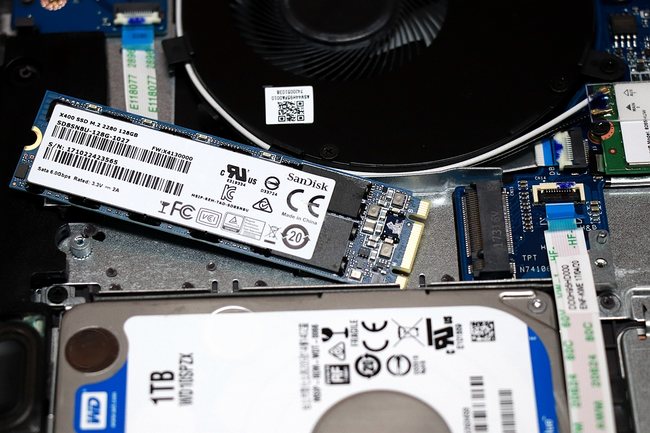 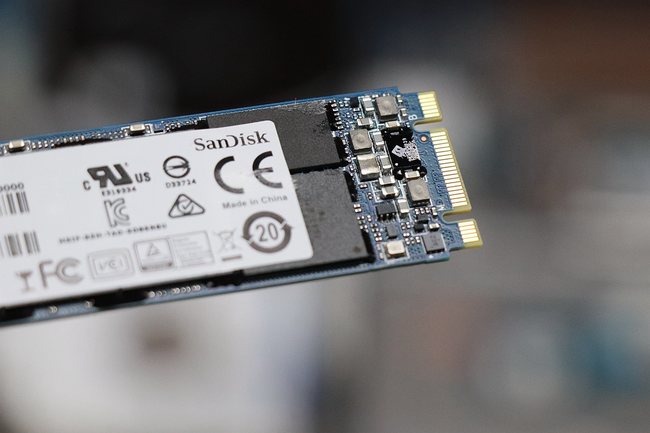