The Vivo X20 boasts of a 12MP main camera at its rear and a 12MP front-facing selfie shooter. There is a Non-removable Li-Ion 3245 mAh battery powering the phone with support for USB micro USB v2.0, USB OTG and Dual SIM (Nano SIM).

First of all, remove the SIM card tray. 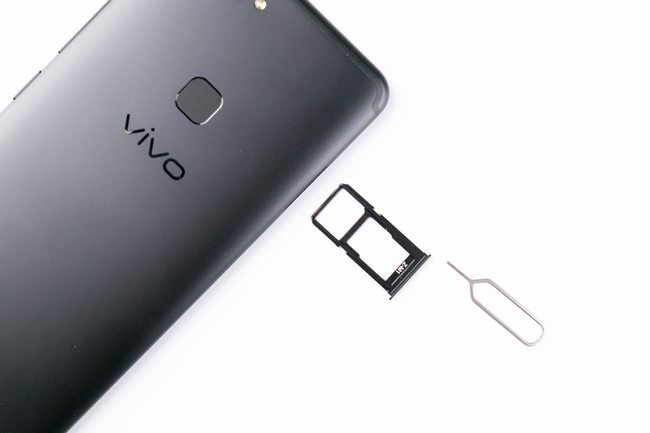 SIM card tray’s upper has a sealed rubber ring, which has almost become a standard for waterproof mobile phones, but the phone, as usual, there is no propaganda waterproof function. 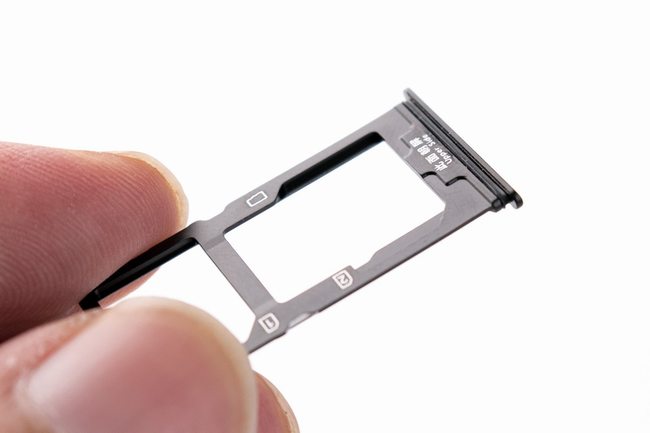 Remove the two hex screws at the bottom of the fuselage.
After the two screws removed, pry up a little bit with a suction cup, at the same time insert a pick under the back cover. Slide the pick to separate the back cover along the edge. 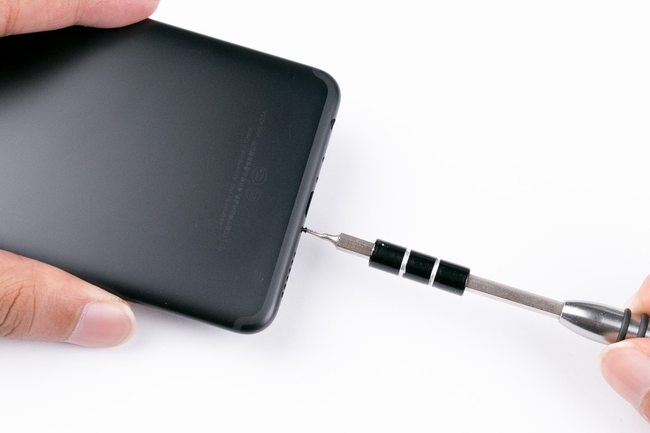 It is worth noting that at this point we can not completely separate the back cover, fingerprint identification cable is still connected to the fuselage. The connector is also designed with a metal plate.
So next, remove the retaining screw from the metal plate and remove the plate. Then disconnect the fingerprint cable connector from the motherboard. The back cover is completely separated. 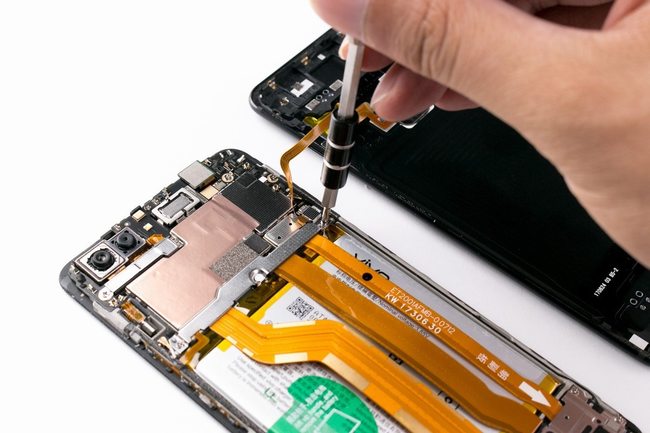 From the close-up of this back cover can be seen, the whole body does use a large area of metal material, and the seal around the frame, the edge is surrounded by black seal foam. And the antenna contacts are plated with gold to prevent aging, the location of the battery is also specifically dug a slot to increase the battery capacity.
Compared to the previous generation X9s, vivo X20’s back cover less large area of graphite heat paste, I do not know because of space reasons or other reasons, this generation of Snapdragon 660 chip heat control better. 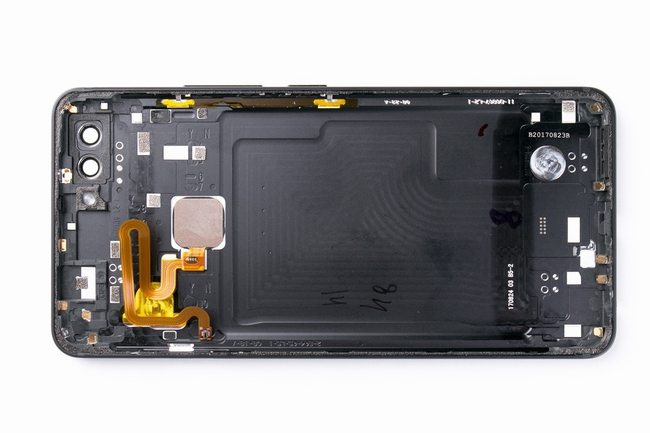 All the chip metal shields are covered with a copper heat sink, efficiency and cost are higher than the graphite heat paste, in addition to the two coaxial cables because of their own stability have been very high, so there is no special fixed. 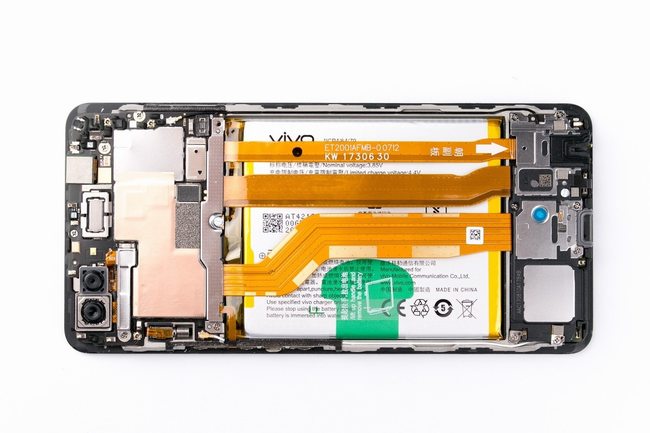 Remove the bottom plate screws, then remove the cover, you can see a large number of connectors below, a total of five, respectively, corresponding to the button, screens, battery, sub-board and data interface. And then disconnect them from the motherboard. 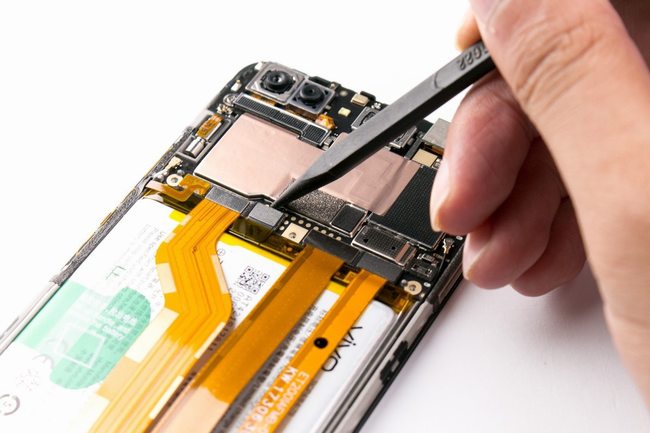 Then remove all the screws that can be seen on the motherboard. 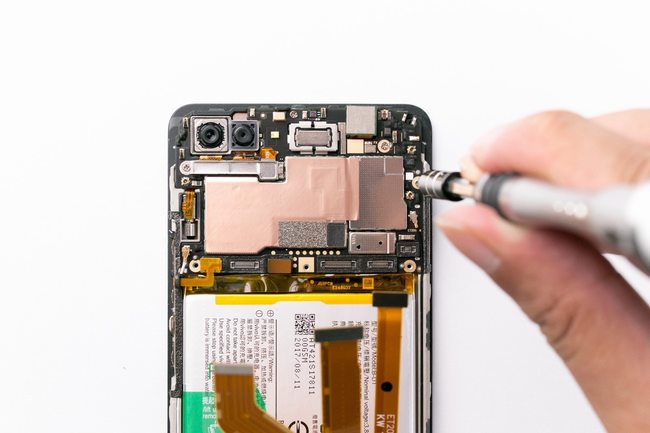 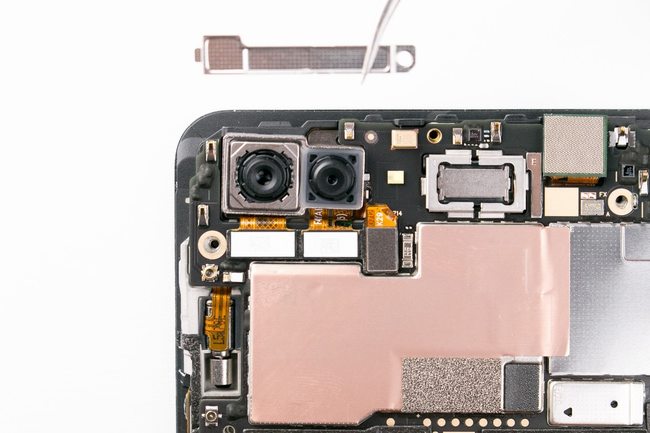 When the connector and the screws are removed, we can carefully remove the motherboard from the body, and the roll cage structure is displayed under the motherboard, the vibration motor and the handset are embedded inside. 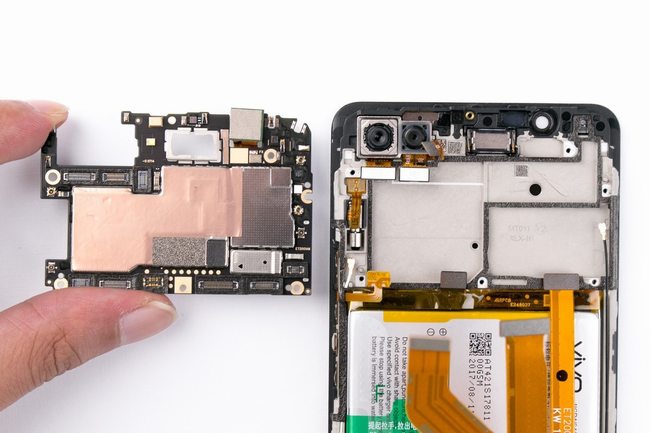 We take a look at the back of the motherboard. The front camera also has a fixed by a metal plate, the light distance sensor integrated on the motherboard. Handset and dual camera position have a large area of hollowed out. The purpose is to give them as much space as possible. 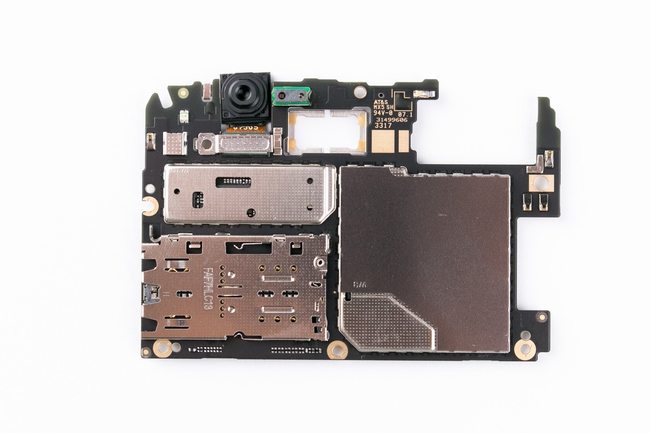 Then remove the camera, you can see the main camera 12MP sensor module significantly larger than the 5MP sensor module, the 5MP camera does not support auto focus, its role is to assist the completion of shooting depth photos, sorry cannot be achieved through the different focal lengths lossless zoom. The size of the front camera can be described as huge. It is estimated that the main camera with the same full-pixel dual-core sensor. 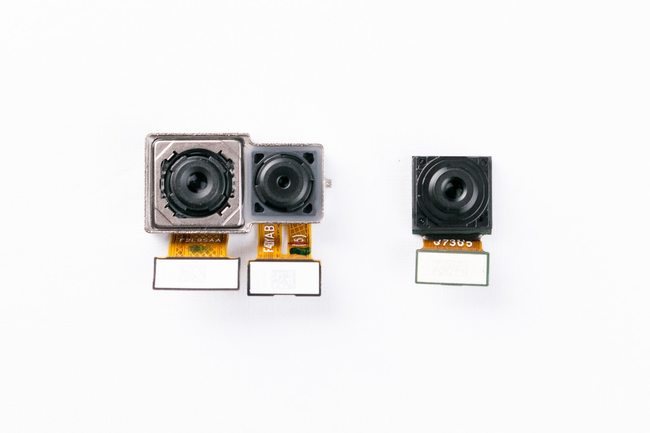 Most of the metal shield on the motherboard is welded, so we cannot open one by one to see the inside of the chip. 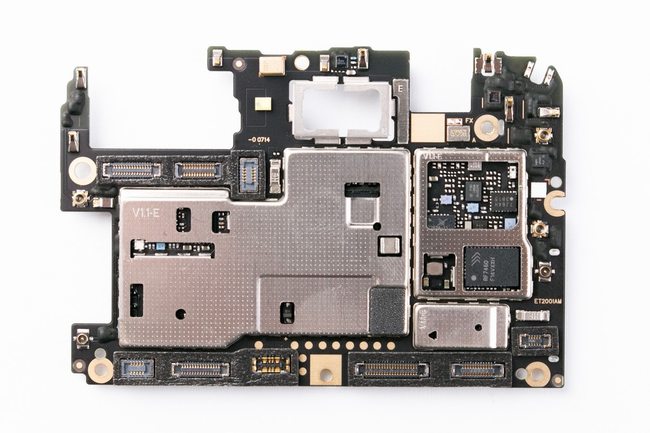 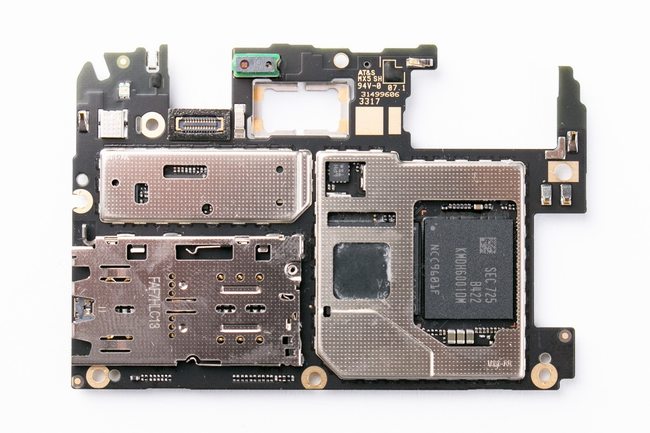 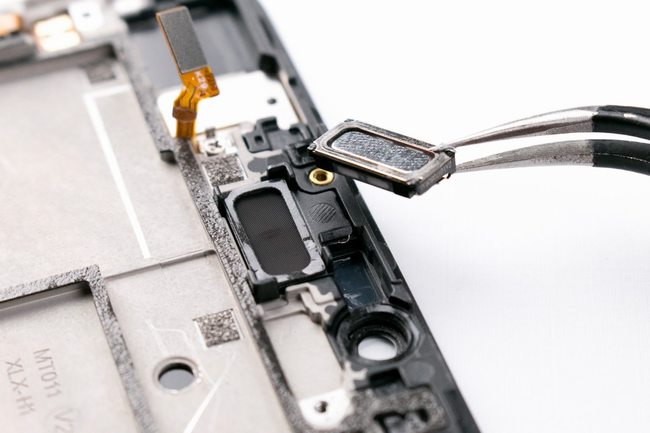 It needs a sound guide tube design, which is the common approach for full-screen handset, Sharp Aquos S1, Samsung S8 are doing so. 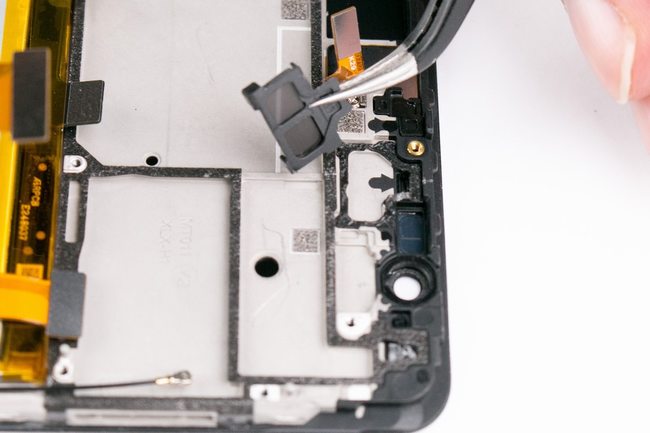 Then start dismantling the speaker module at the bottom, first remove all the screws. Do not know if you have not noticed the blue cover of the speaker module, the cover below is a pile of white spherical particles. 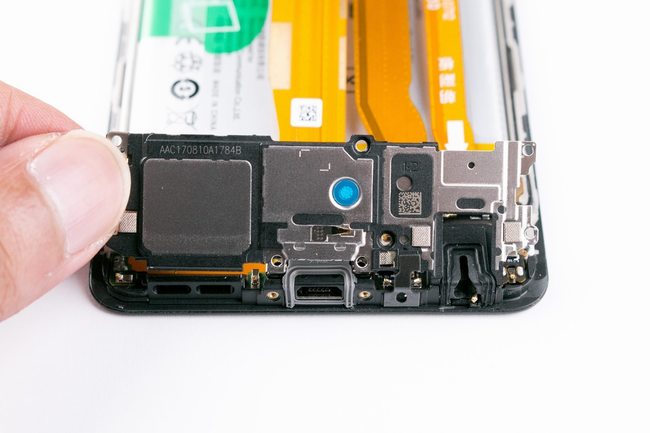 You can see from the above laser text that the product is from the AAC. In the yellow transparent film on the back of the loudspeaker, there are more white particles. I guess this should be AAC’s patented technology, intended to enhance the quality of the speaker. 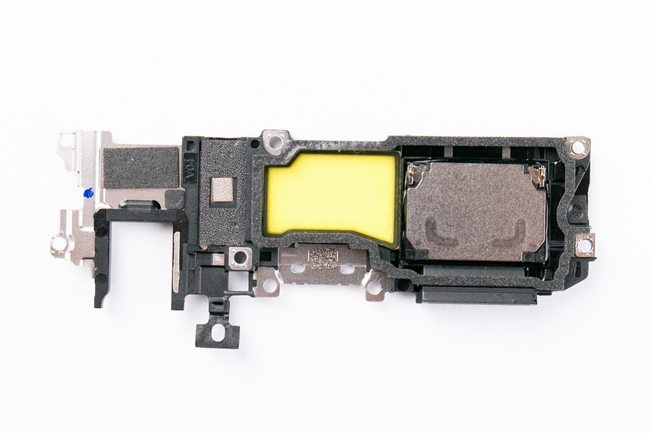 Under the loudspeaker module, has two parts, one part is the data port area, the other part is a sub-board area. They are not connected. 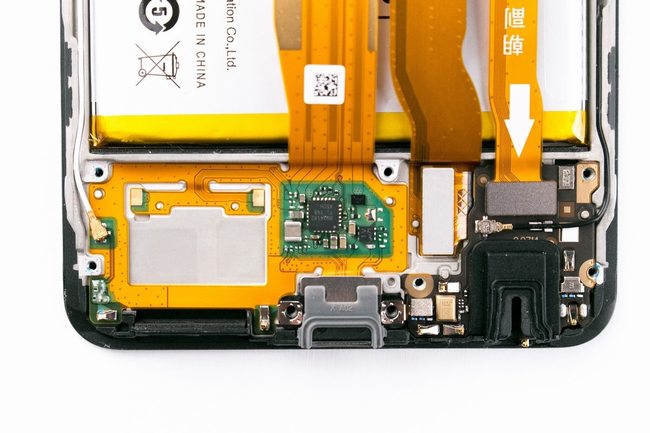 First, disconnect all connectors. Then remove the bottom plate, it is integrated with a headset and microphone jack. The headphone jack has a rubber seal. 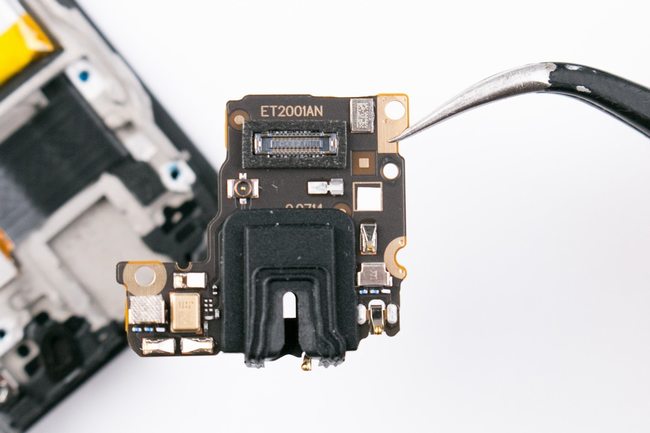 Lift the bottom data interface cable a little bit, and take it out. 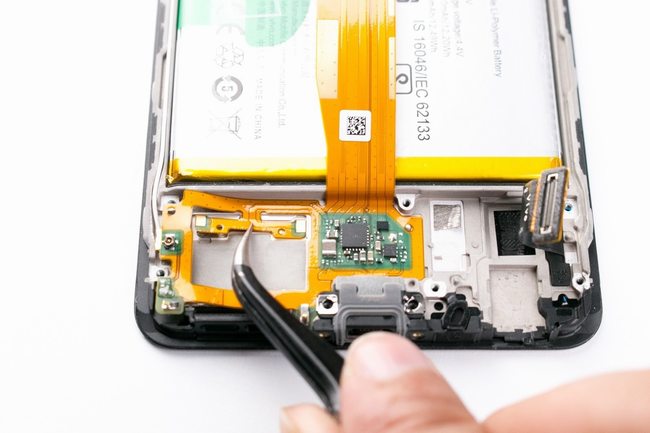 The data port also has rubber for sealing. 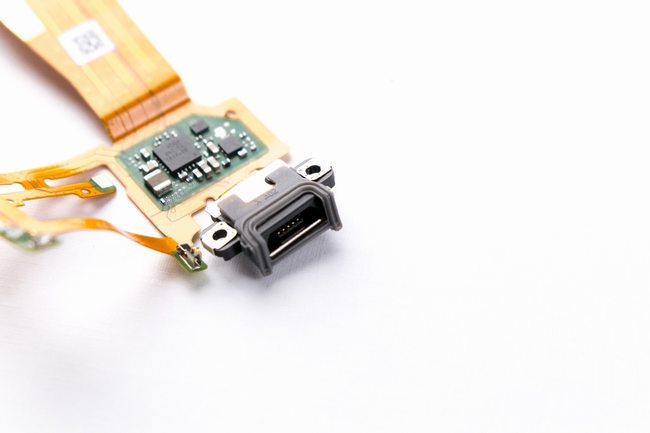 There is a green tape on the battery, according to the tips to lift the green tape, you can separate the battery. But the separation process is still a bit strenuous because the battery has a lot of glue on the back. 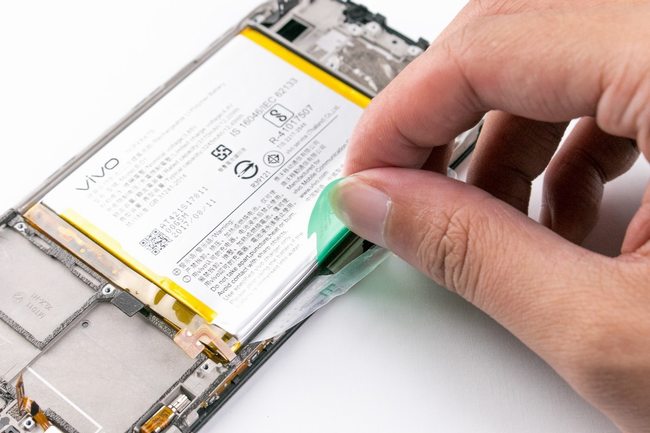 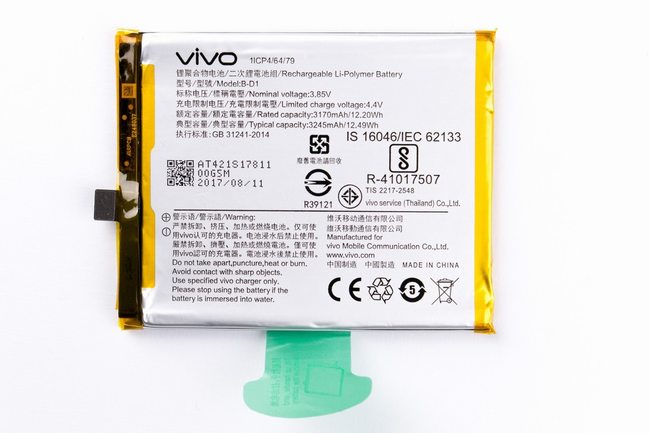 The battery cell comes from ATL. 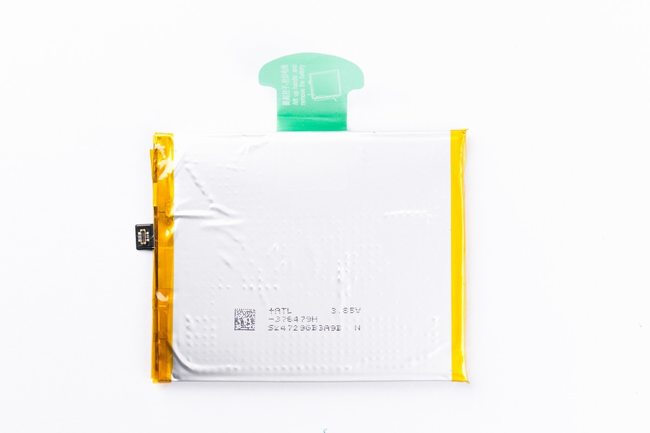 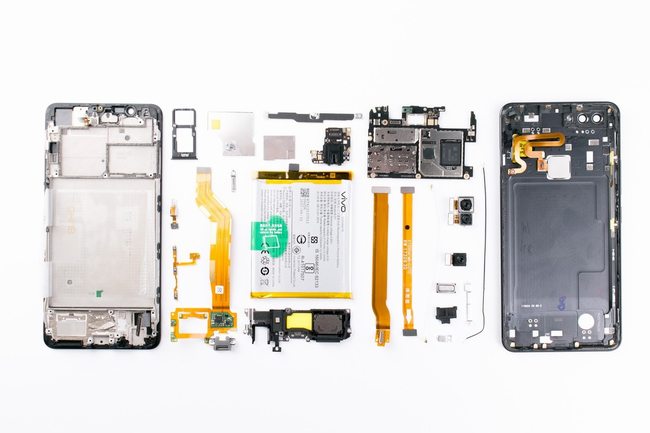