The Xiaomi Mi 6 powered by 2.45GHz octa-core Qualcomm Snapdragon 835 processor and it comes with 6GB of RAM. The phone packs 64GB of internal storage cannot be expanded. As far as the cameras are concerned, it packs a 12-megapixel primary camera on the rear and an 8-megapixel front shooter for selfies. 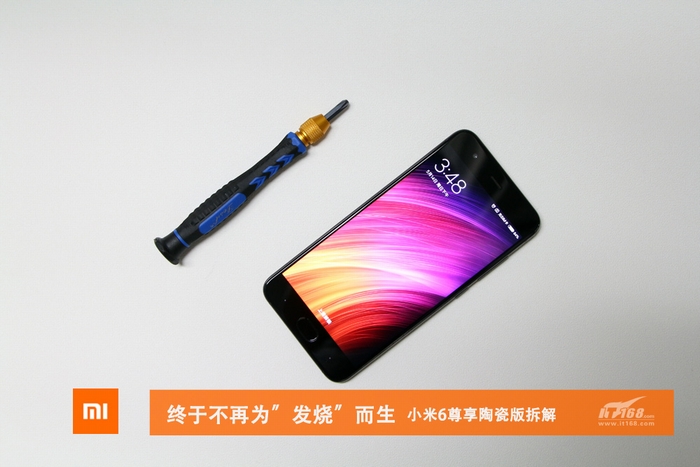 As one of the most popular brand flagships expected, Xiaomi Mi 6 is finally released, the use of curved glass in appearance, and use the Dual cameras. Today, we will take apart the Xiaomi Mi 6 to see its internal workmanship. 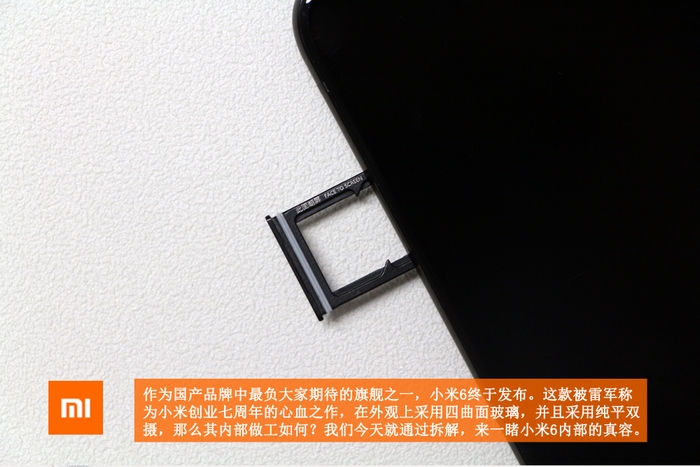 In Xiaomi Mi 6 conference, Lei Jun is full of praise for the appearance of Mi 6, and with a long time to introduce Mi 6’s workmanship. The Mi 6 we received with a ceramic back cover, the appearance is basically same as the bright black version, the logo from white to gold. The back uses four curved glass, more mellow. The weight of 182G and is not light in the 5.15-inch smartphones, but it looks more texture. And it is relatively slippery. It is recommended to buy accident insurance. 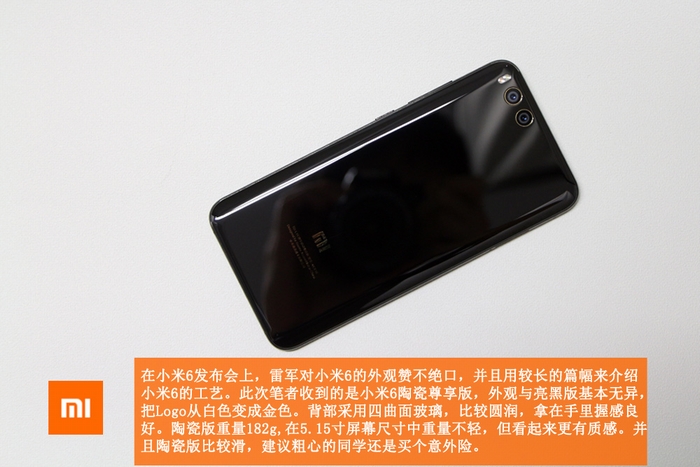 Xiaomi Mi 6’s ceramic back cover with double-sided foam adhesive directly attached to the fuselage and did not use the buckle. There is still a certain risk of loosening when dropping. 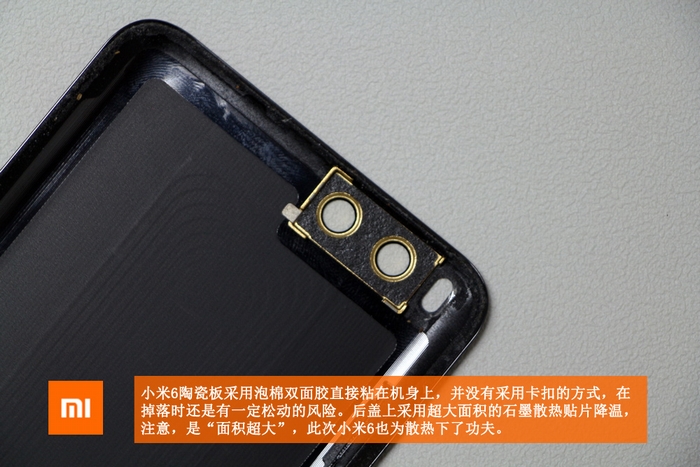 Xiaomi Mi 6’s NFC close-up. Xiaomi from the Xiaomi 3 began to support the NFC function, after the removal of the Xiaomi 4, and then the Xiaomi 5, Xiaomi note 2, Xiaomi mix, Xiaomi 5S are all support full function NFC, support MI pay and bus card, it is really convenient. 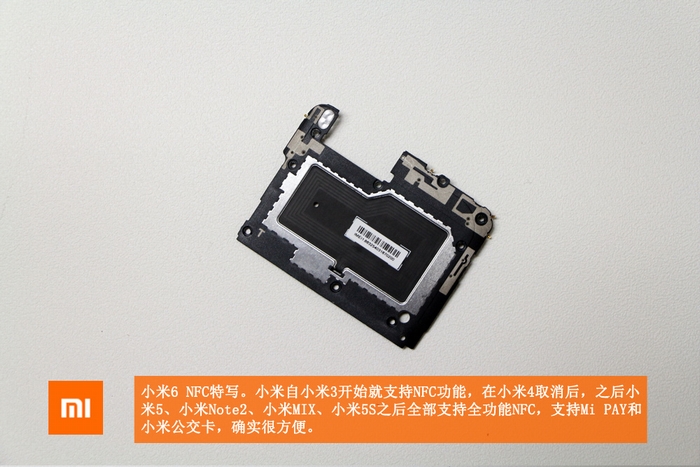 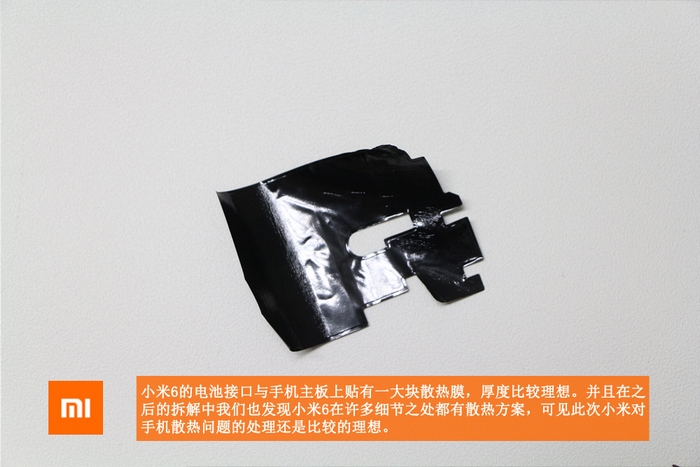 It comes with a lithium-ion polymer battery, the typical value of 3350mAh, manufacturer by Scud, working voltage of 3.85V, charging voltage of 4.4V. 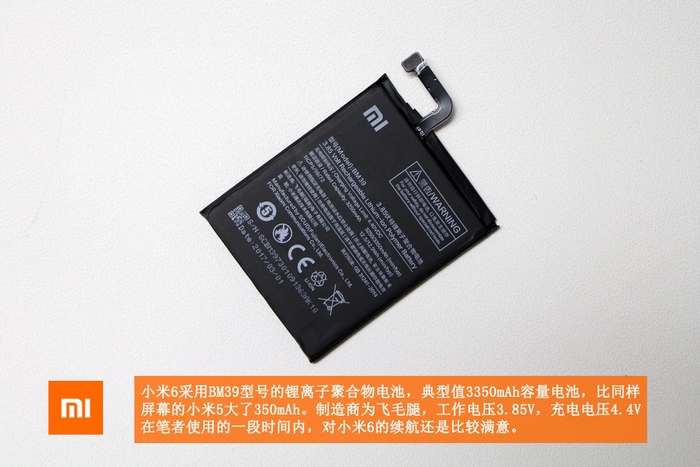 The phone using Synopsys’s touch chip, model is S3330, and using Goodix’s IFS fingerprint program, can be directly attached to the touch screen under the glass panel. 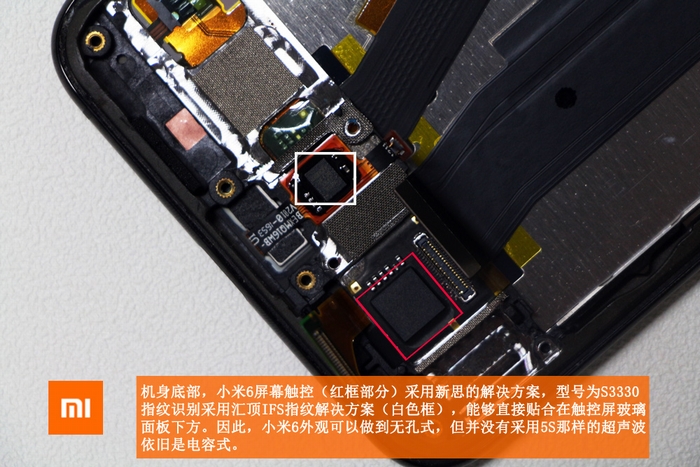 Pull out the adhesive tape and remove the battery. 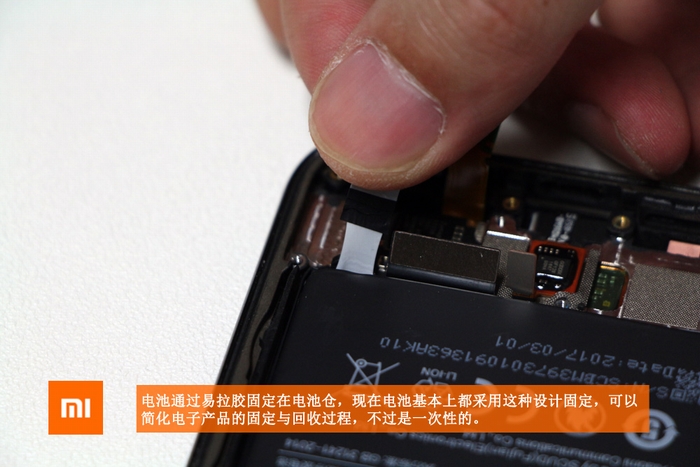 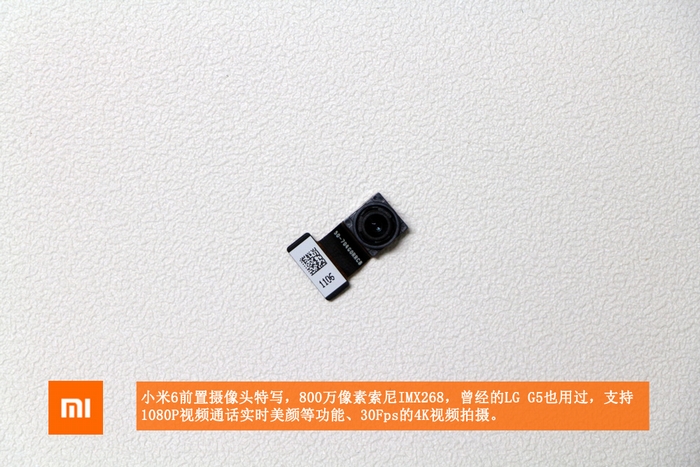 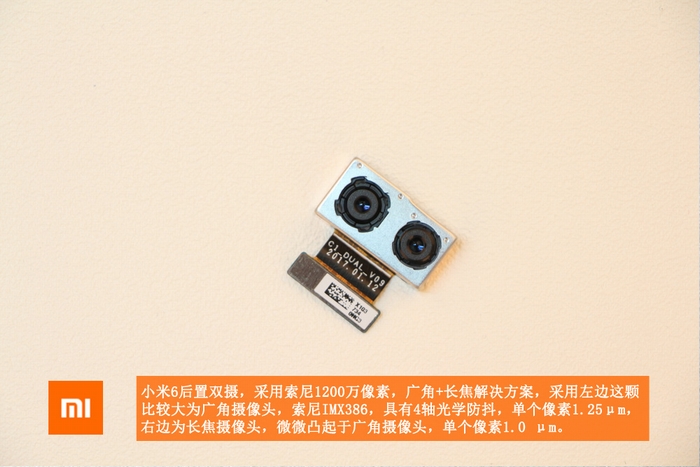 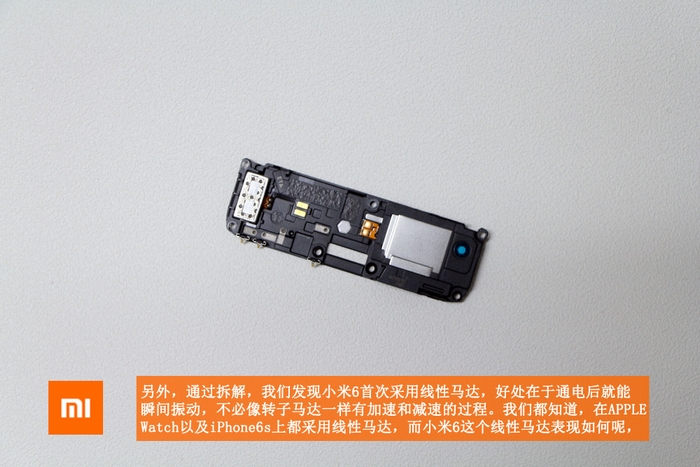 However, although Xiaomi Mi 6 also uses the linear motor, but compared to iPhone and Tapticengine, no matter from the group or volume, there is still a gap. iPhone can be achieved by multi-stage vibration + software algorithm to achieve 3D Touch, and simulate the Home key real feel. At present, millet 6 in the feel and function is lacking, but no matter how, Xiaomi Mi 6 can use better parts, for the user is good. 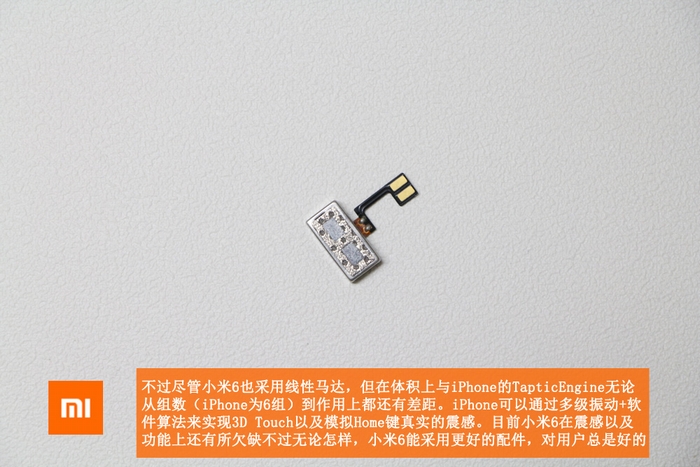 On both sides of the motherboard, use of a large number of silicone grease on the metal shield, and to be honest, although the silicone grease is not a fresh heat dissipation material, but this way of smear, I still see for the first time. 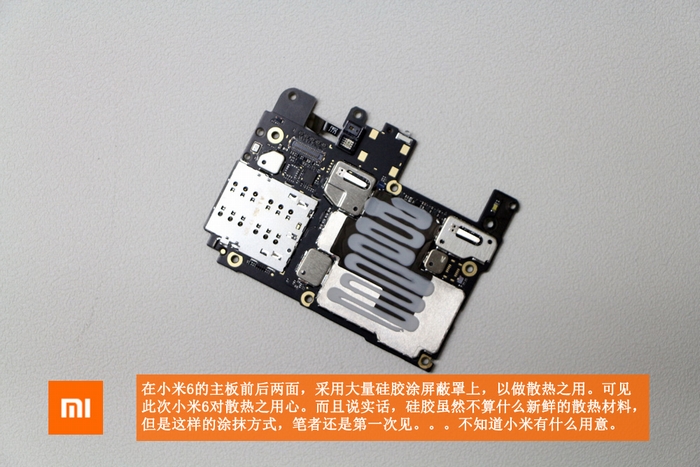 Remove the shield. There is a layer of silicone grease. 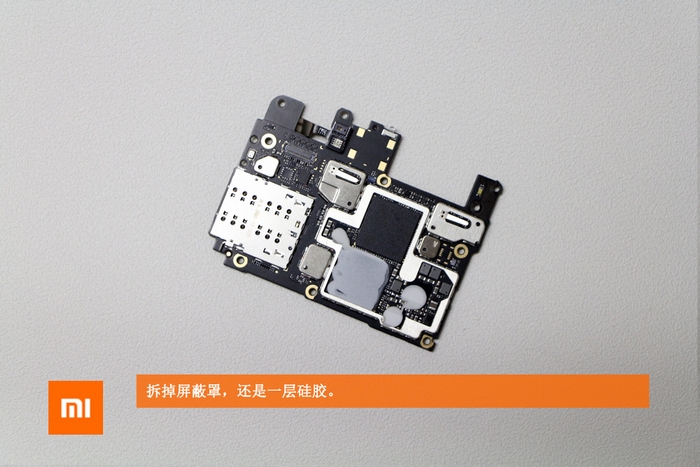 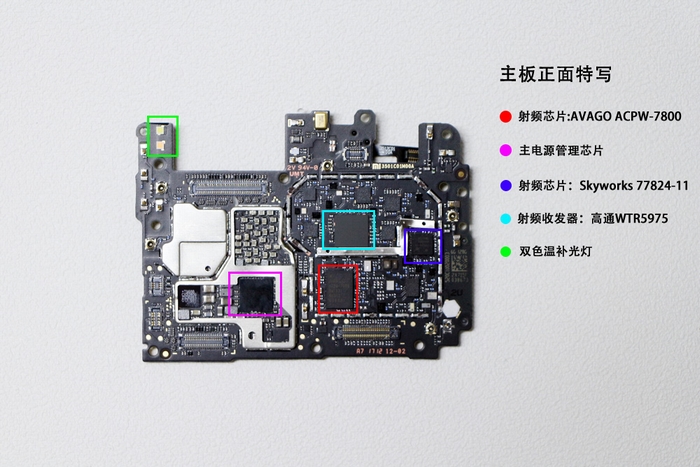 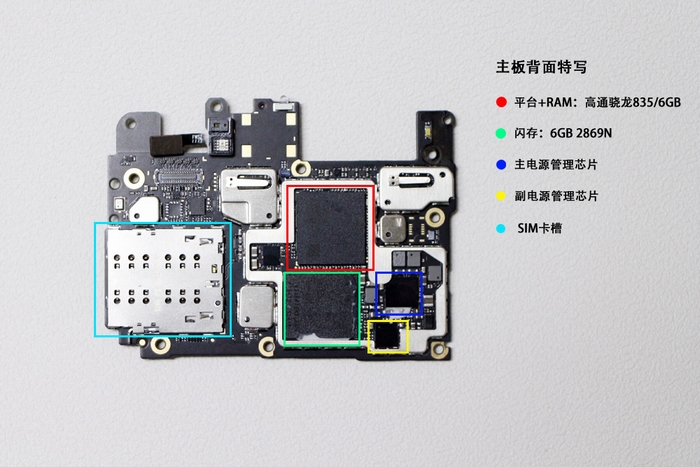 Through the dismantling, we can see Xiaomi Mi 6 internal workmanship is very good, and the back cover fixed to the body with the glues, so there are some user will be found a gap. In the SIM card tray and the charging port has sealing treatment so that the phone can support waterproof. Xiaomi Mi 6’s motherboard with a common three-stage structure, in the fuselage internal, the motherboard with a lot of silicone grease and a lot of graphite sticker, it is making the phone really good in the heat performance. Overall, Xiaomi Mi 6’s internal workmanship is really good. 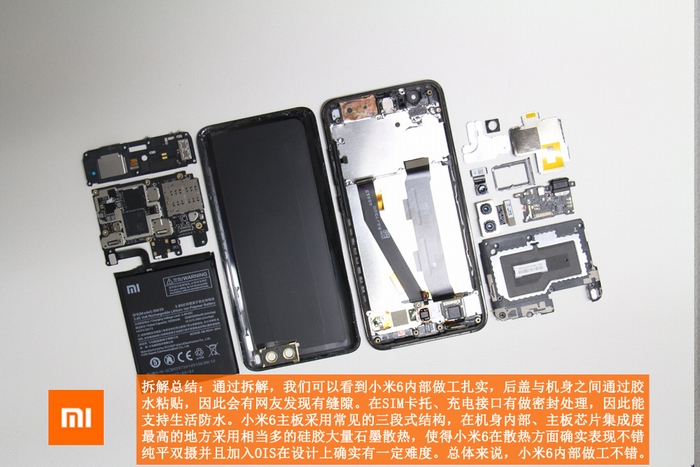