On April 3, Intel has officially launched its latest 8th Gen standard-voltage Coffee Lake Core mobile processor. Then, a lot of gaming laptop products which are powered by Intel’s new processor has been launched.  We will list the Coffee Lake laptops in the form, and these laptops are launched before or to be launched soon. Besides, we will keep updating this list. If we have missed some models, please leave a message to us in the comment area.

This all-new 8th Gen Core processor is built on the 14nm manufacturing process. But the chip’s core number increases from 4C8T to 6C12T. Mainstream product’s maximum frequency increases from former 3.8GHz to current 4.1GHz. From that, we can see that this new processor’s performance has been greatly improved. According to the test result, the eighth-generation Core i7-8650H processor’s performance has improved over 30% compared with 7th Gen Core i7-770HQ’. 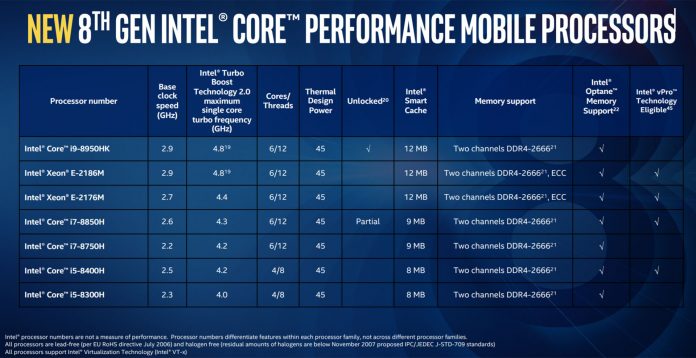 On CineBench R15, the Core i7-8750H processor’s multi-core score reaches 1049cb, and its single-core score reaches 175cb. This can be said to be the greatest improvement on mobile CPU performance in the recent years. According to Intel official party, the i7-8750H processor’s game performance has improved 41%, and its video editing speed has increased by 59%.

Besides, Intel has also brought the Core i9-8950HK mobile processor which adopts 6C12T design. This chip boasts of Intel Turbo Boost technology. When the processor at low temperature, and it has turbo power space, its automatic turbo frequency can reach up to 4.8GHz, which nearly reaches the highest standard of the mobile platform.

As the Coffee Lake mobile processor has just been released, many manufacturers only released large-size gaming notebooks, and Coffee Lake laptop under 14-inch is not yet available, but we will continue to update this list.

How to Extend Laptop Battery Life

How to Fix a Slow Laptop